Sorry, but the BECK - converted ex-working narrowboat listing has already been removed.

Get an email notification when another vessel like this is listed

We also have the following similar vessels currently advertised: 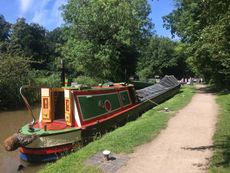 Large Northwich motor "Stratford"   £52,000
Stratford is a large Northwich motor, built by W.J. Yarwood & Sons for the G.U.C.C.Co. and delivered in late 1936. Stratford has a long working history, having passed from the G.U.C.C.Co. to the British Transport Commission (eventually British Waterways), been leased to Willow Wren and sold to Alfred Matty and Sons, not reaching private ownership until 1987. She is unconverted and clothed. She has a well fitted out traditionally decorated steel cabin, containing a Premier stove. The engine room is largely original, containing a Petter PD2 with electric start. She was re-bottomed and... read more